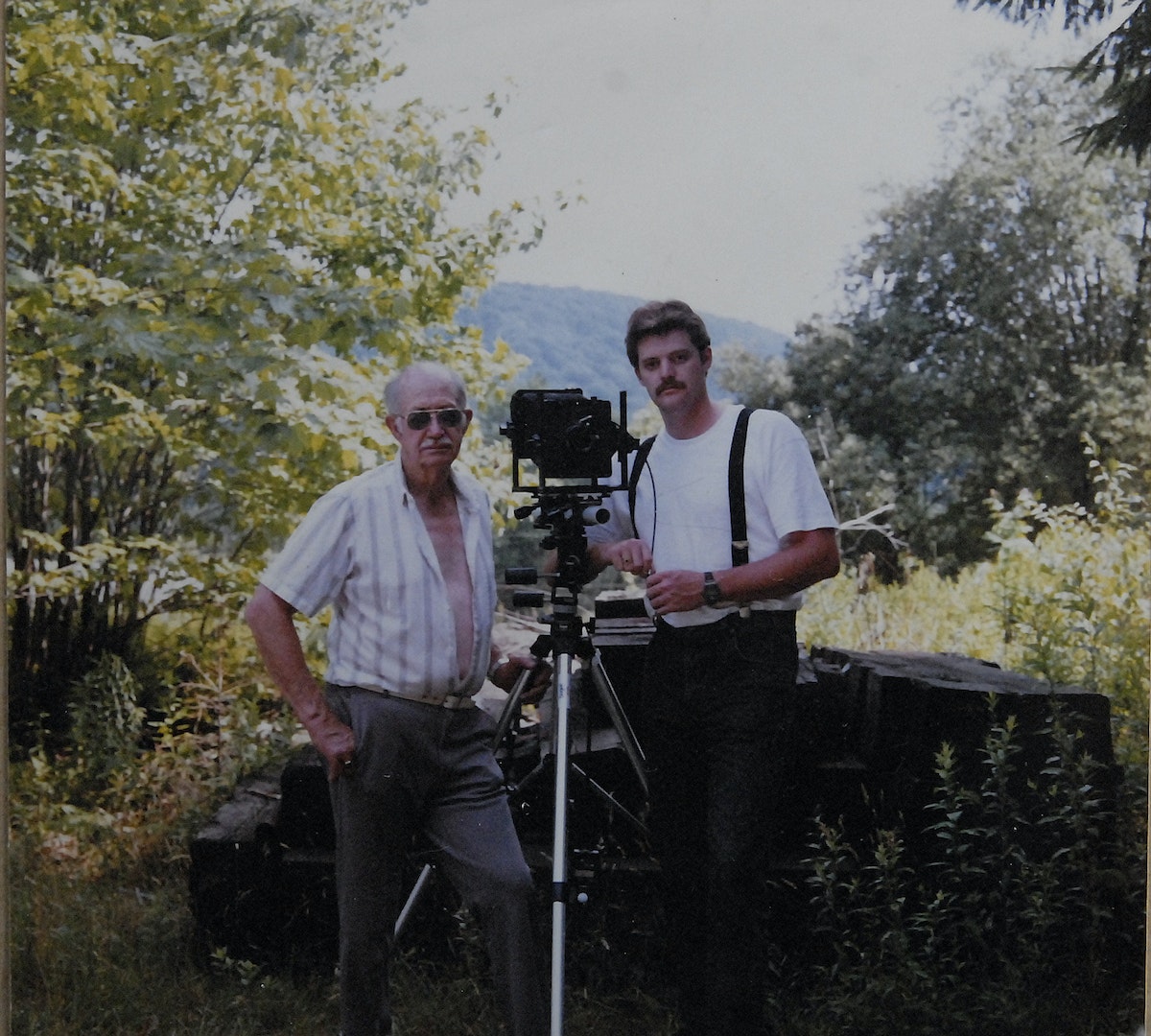 I recently returned from Tucker County West Virginia, my favorite place in the world. I used to live there and hope to return some day to be reunited with the mountain for the rest of my life. It's beautiful and it fills my mind with happy memories. My grandfather, Alvie Goff, always encouraged me to be a photographer. He always had the right words to say - even when my pictures were, well, kind of, sorta okay. 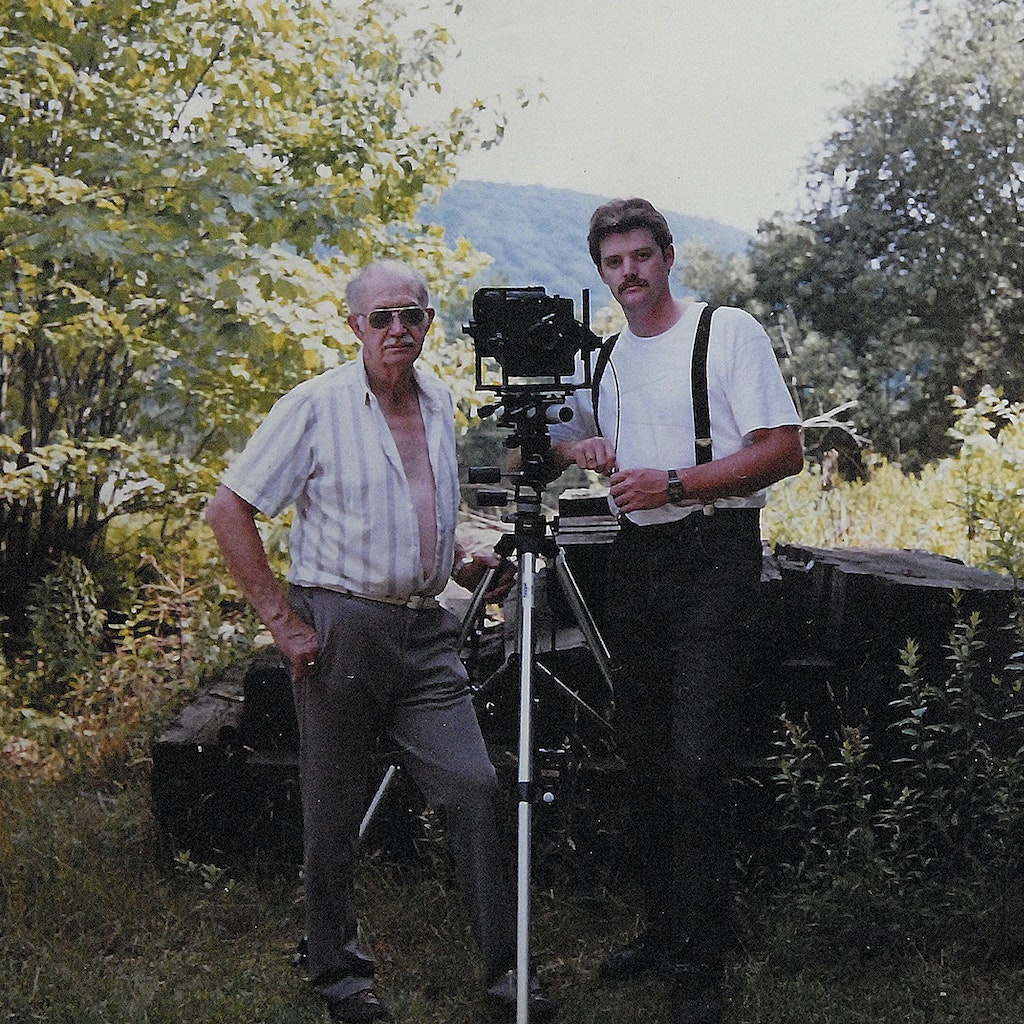 This picture was made in the 1990's. We already spent about a decade marching through the Blackwater Canyon with 35mm, medium format, 4x5 Graflex cameras and even that mono rail 4x5 camera seen here. I loved every minute of it and would give anything to have just one more day with him, in the old beat-up GMC pickup and a couple of boxes of gear. Life was good.

We would shoot film and I would take it home and develop it in my small bathroom until the day I opened a studio and built a darkroom. I think shooting, developing and printing your own work is the best way to learn. All of the cameras were manual so I really had to learn and understand every step. Lots of mistakes were my teachers and my grandfather would be in the background offering words of wisdom.

That process also taught me to really appreciate film. Now don't get me wrong, I am not cursing digital. As a matter of fact, as a newspaper reporter I can't say enough about the benefits of my Nikon D3s. It's lightning fast compared to film and the news doesn't wait. But still there is something about film. I do believe that a hand-printed portrait from a silver-based film looks so much better than digital. I know I'm going to hear a lot of arguments over that but it is the way I feel.

So if that's the case then why isn't every professional studio offering it? Well several reasons, first and foremost is cost. It just isn't cheap to shoot film and buy all the chemicals that it takes to process it and then there is the cost of paper and paper chemicals. Another reason is you can't see the image immediately, like you can with digital. Which also means it has to be right from the beginning. If you make a mistake you won't know it until you're in the dark watching it develop under a safe light. And third, you have to know what you're doing. You can't shoot film like a machine gun and hope it works out. You have to light and meter your set and subject. You have to know your film characteristics and you have to know your gear, inside and out. And the fourth reason is many pro photographers can't find clients that are willing to take the time, spend the money, and then wait for the results.

On the other hand, a hand-crafted 4x5 contact print on 5x7 paper is as unique as it gets. Many details go into that type of commissioned portrait. So let me explain. A 4x5 inch negative is loaded into a film holder. Then the pose is selected, the lights are metered, the background and props are placed. I go under the hood and look at the portrait (which appears upside down in the viewfinder). load the film holder into the back of the camera, remove the dark slide and then shoot the portrait. The film holder is then flip over and another shot is exposed (more will be shot if needed). The sitter is then sent home and I head into the darkroom where I unload the film holders and load the film into a large developing tank. Chemicals are measured and the temperature is set for the proper developing time and temp. The film goes through a three-chemical process and then thoroughly washed. Then it's set up to dry.

I return to the darkroom the next day and make another three chemical bath and load the trays. I make a test print showing various times to find the correct time for exposing the negative to the paper. After the test I developing the paper then wash the print. A time is selected and the process is repeated, over and over if necessary. Then the print may be dry mounted to a hard backing to help protect it. We then have a custom-made portrait that you will be proud to hand down to the next generation.

That is an art that seems to be dying but I'm sure you'll be happy with it. So if you're looking for something that is very unique and doesn't look like everyone else's portraits call me today to set up a time for us to get started.

Here are a few details for you.

Do the prints have to be the same pose? No. It's up to you which pose you choose. I will shoot at least three different poses for you to choose from.

How many people can be in the portrait? That's up to you.

Can I buy additional prints? Yes. Additional 5x7 prints are available at $25 each. If you need more than 10 a discount will be applied.

Can you retouch the portrait? These classical portraits are designed to not be retouched. However you satisfaction is guaranteed.