Medical and religious team from Berkeley County arrives in Africa

JINJA- After a grueling 28 hours by transatlantic plane, truck and van the team arrived at a hotel in Jinja, Uganda. After a few short hours of sleep they departed for a small village almost four hours away to offer a medical clinic and religious services.

The first stop was in a village near an orphanage and farms. Ugandan pastor Mwagale Andrew Rich drove one vehicle while Bato, a local retired mechanic, drove another one full of medical supplies, a medical team, United States pastors and one journalist.

People walked for miles from surrounding villages to hear the pastors preach and see the medical staff for pains that they were suffering. Over 300 patients were seen but some were turned away as the needs exceeded the staff.

A 24 year-old woman named Josephine was at the end of her pregnancy and saw the doctors for advice about her soon-to-be-born baby. She has had a tough life. Her father died when she was one month old. She hopes to one day open her own clinic to help people in remote villages. “I’m just praying to God,” Josephine said.

A very large crowd sat in the hot sun to hear West Virginia Pastor Tom Snyder speak. Snyder is the pastor at Back Creek Valley Full Gospel Church in Berkeley County. “This is because you prayed and God answered your prayers,” Snyder said.

The children from the closest orphanage waited patiently with hundreds of other for the hot meal that was prepared in the field. Some of the children had lost both parents to AIDS and many others were abandoned. The youngest child had come to the orphanage right after her birth. Her mother left the hospital immediately after delivery and could not be found. Four brothers were abandoned after their father died of AIDS and their mother realized that she would be dying soon.

The orphans sleep on mats in a building less than 200 square feet. There is not a single toy at the orphanage although a neighboring village boy had a homemade soccer ball. There is no electricity and at night it is total darkness. Water supply is not consistent. Ugandan pastor Felix Otenge runs the orphanage and is trying to build a school there.

After the long two-day event the crew boarded the waiting vehicles to make their way to the next location. “We’re just getting started brother. Wait until we get to the leper colony,” Snyder said.

Reporter Jeff McCoy can be reached at reportermccoy@yahoo.com 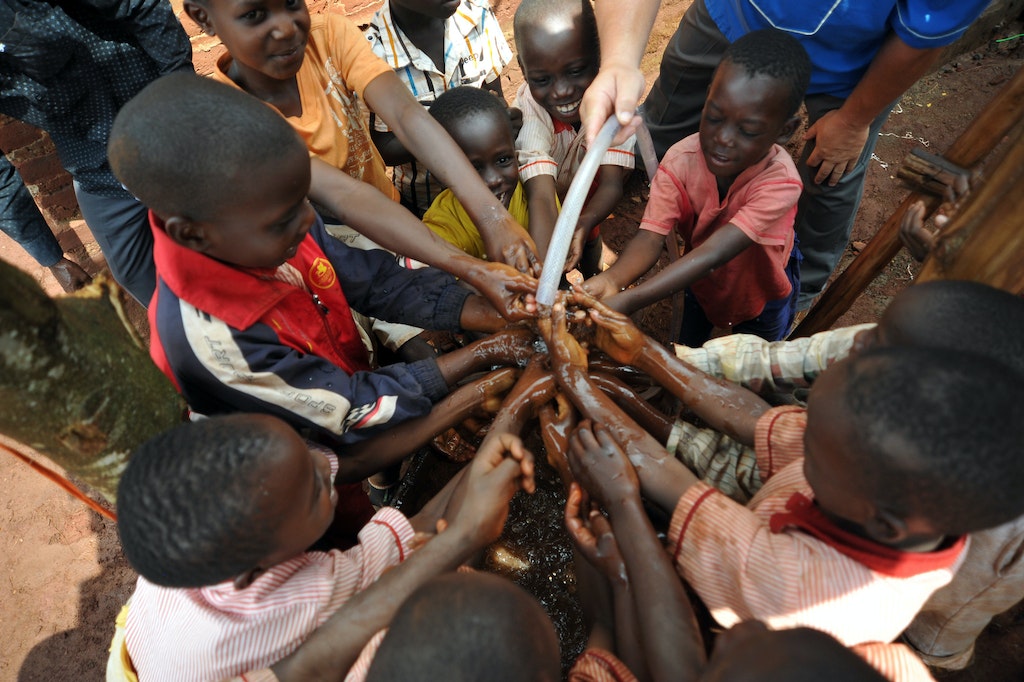 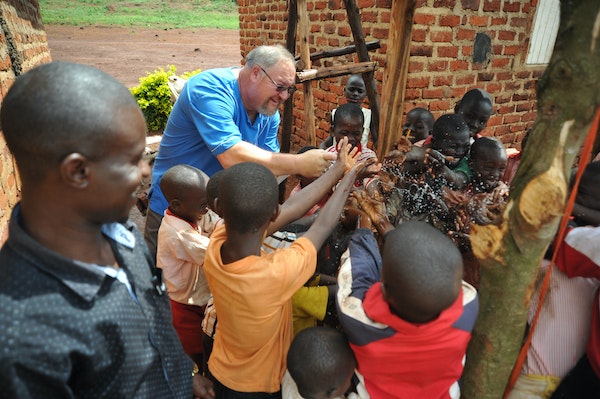 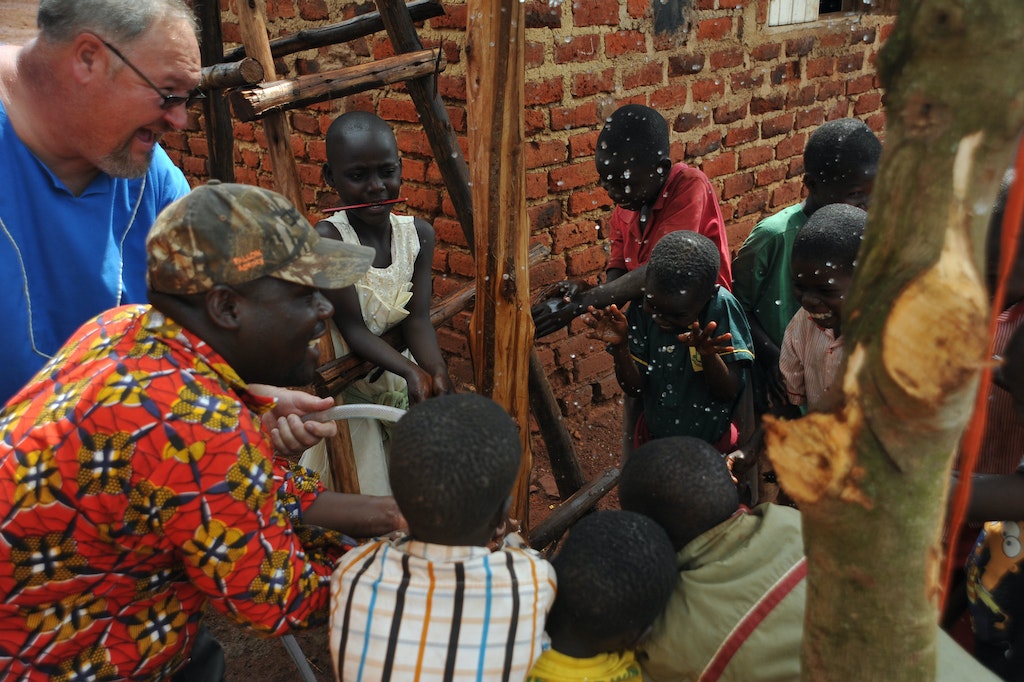 Maga Maga, a city in Mayuge District, Uganda, Africa - August 1, 2017: Children at an orphanage in Uganda are happy with a new solar water pump that brings needed water to their living area. A new solar pump, built by Engineers Without Borders, can pump three gallons a minute using the sun as the power source. The pump was delivered by missionaries and doctors from the U.S.A.

Maga Maga, a city in Mayuge District, Uganda, Africa - August 1, 2017: Children at an orphanage in Uganda laugh as USA Pastor Tom Snyder sprays them with water that is being supplied by a solar water pump designed and built by Engineers Without Borders. The pump will supply water needs for their orphanage and school.

Maga Maga, a city in Mayuge District, Uganda, Africa - August 1, 2017: Children at an orphanage in Uganda get splashed by their native pastor Mwagale Andrew Rich as USA pastor Tom Snyder helps in the background. 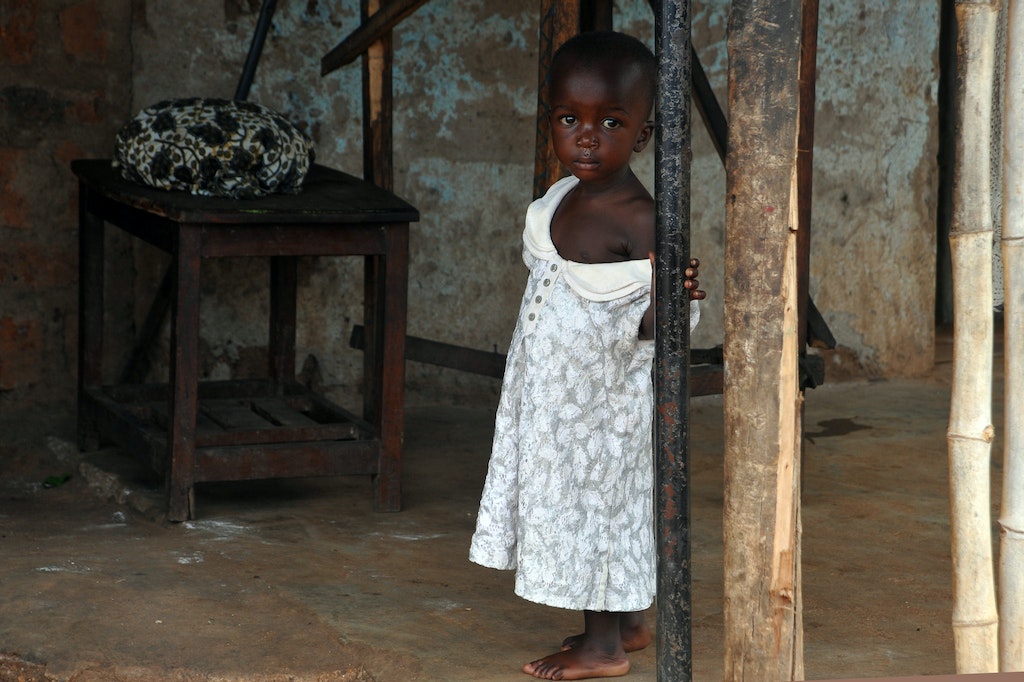 MAGA MAGA, AFRICA – Uganda has many orphans. Parents have died of AIDS or other diseases or in some case abandoned their children for lack of food or complete loss of hope. It is common to see a five-year-old child with a one-year-old sibling on their back. Most find their way to one of the many orphanages.

The children quickly adapt to a new life in the orphanage as administrators struggle with one more mouth to feed. Local pastor Mwagale Andrew Rich knows the challenges of maintaining a growing orphanage with limited resources. His facility is located in Maga Maga, a bristling town with many stores that measure less than 100 square feet but yet supply the needs of the mobile community. He currently has 120 children at his facility. Adoptions are an option but rarely happen. Most children stay until they can go to a trade school.

Children are at risk as the system has become overloaded with not only orphans but also corruption, crime, and lack of utilities. The children are also likely candidates for kidnappings by Satan worshipers as human sacrifices. As an orphanage grows so does the demand for water which means children are pressed into service to go to a hand water pump station and fill up five-gallon cans. That long walk to and from the station is a prime opportunity for the children to be taken and never seen again.

Pastor Andrew knows all too well the dangers. He lost a boy to kidnappers but was able to retrieve him before it was too late. There were two cars in the area. He had to decide on one of them to pursue. “It seemed like that one but the Spirit said ‘No, that one’,” So he and his team chased the different car until the driver and passenger stopped, jumped out and ran away. The boy was found inside, safe and sound.

That will not be a problem anymore for his location. Engineers Without Borders in the United States built a portable solar water pump that is capable of pumping three gallons a minute. The pump was taken to Africa from West Virginia in the United States by a medical and religious team. The pump was disassembled by TSA before being allowed to be boarded on the transatlantic plane. After a few hours of repair and rebuilding the pump was put into use at the orphanage.

The government of Uganda has installed or allowed to be installed, water lines closer to homes and businesses, but many times they do not work on a regular schedule. Sometimes water may flow for a few hours then is turned off again. Residents do not know when it will be on again or for how long and so the journey to the hand pumps starts once more. Sometimes the hand pumps can be miles away.

Now with a flip of the switch on the solar pump water flows freely. Few moving parts mean maintenance should be manageable. Because it is only 37 pounds and on wheels it can be moved to other locations to assist in flooding rainwater removal, irrigating crops, water storage, mosquito infested water removal and can easily be converted to provide light on a dark night.

Two additional 12-volt batteries were installed in parallel to allow longer duration serving like a deep cell battery. A small tool kit was included to help with minor repair over the years.

Solar power is used only in a few locations in Uganda. The cost of purchase and installation keeps many poor families from being able to take advantage of it. This solar pump is capable of expansion as other solar panels and batteries can be added. For now, the residents of the orphanage in Maga Maga are happy that the long trips to the hand pump are over. The pump delivers more than water. It delivers hope and safety to the residents of the last safety net for the children.